The attendees at the 2012 FOBNR Convention in Amarillo are now heading home, with great memories, photos and fellowship.

We arrived to actually beautiful North Texas weather on Wednesday and after registration was completed Dave Poplawski handed each member a list of the convention attendees, along with their specific interests. This was a new feature and was much appreciated. We then headed to the Big Texan restaurant – home of the free 72 oz steak, but nobody had the courage to make that attempt. On our return we met to organize for Thursday AM and were also able to watch a vintage BN video presentation and see a number of excellent “slide” presentations. This was probably the first convention where we actually did not have any slides, using all digital presentations.

On Thursday morning we met to carpool to Borger, TX and our tour of the Panhandle Northern, a short line linking with the BNSF in Panhandle, TX and servicing a Chevron Refinery and two competing carbon black producers in Borger. We were able to tour the Panhandle Northern yard and were taken through the refinery. We then drove to the carbon black plants, and while parked in the Orion facility parking lot so our host could point out the features, the plant manager came out to find out about all these picture taking people in his lot. After finding out that we were “safe” he was able to give us an excellent impromptu presentation about his plant, which was very interesting.

On Thursday afternoon we visited Canyon, TX and visited the BN HO layout of Fred Theiss and enjoyed his hospitality. We then visited the Amarillo Railroad Museum and were able to see their HO layout under construction and hear an interesting presentation about the White Train, used during the Cold War to transfer nuclear weapons from the Amarillo based Pentex plant to different areas of the U.S. They now have a number of the cars used in this process, as well as a functioning Alco switcher, which we able to ride inside their museum grounds.

After dinner we had the Membership Meeting, and then again viewed slides, including 2 outstanding presentations by new attendee Mike Danneman, who also has been the Art Editor for Trains magazine and now is a free-lance photographer.

On Friday we again met as a group and headed for the BNSF Yards in Amarillo where we got a tour of both the North and South Yards, as well as the Yard Tower, now used only as a crew change point. After a quick lunch it was off to Progress Rail’s Amarillo facility. There we saw the process for repairing and updating rail cars. We were able to see their Plate F boxcar upgrade project, a project for shortening 48′ well cars into 40′ cars to haul international containers and a number of tank and covered hoppers being repaired and repainted. Friday evening was our Annual Board of Director’s meeting, followed by a slide presentation of the BN in Amarillo 1980-92, and a video of Mike Danneman’s excellent home layout.

On Saturday we had the entire day to railfan – but were disappointed as it was a slow day on the BNSF through Amarillo with “only” 97 trains through town! With beautiful weather and trains ALL day – it was a BNSF fan’s delight! That evening we enjoyed our annual banquet and were able to listen to a presentation by Jason McBride, the Amarillo Terminal Superintendent and our morning guide. His presentation highlighted the improvements that this area has done in safety, lowering the number of cars in the yards and velocity of trains through the Amarillo area. He was also able to answer many questions, including our annual question to our speakers of what they would do to improve their facility with an unlimited budget. Jason’s answer was to move the crew change location, because the 3-4 10,000 foot trains that come through daily tie up the railroad too much with an 8 minute average crew change downtown!

As we broke for the year, we all felt comfortable that we had enjoyed a great convention and that this was an unbelievable area to be able to see the BNSF at full stride! 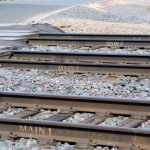 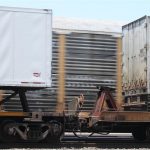 A westbound vehicle train flies past an eastbound stack train waiting for its turn at the crew change point in the Junior yard. Rodney Black photo. 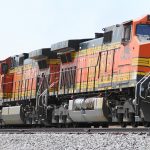 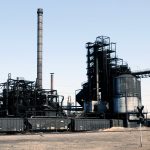 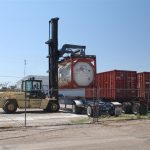 An tank container being loaded near the South Yard. Rodney Black photo. 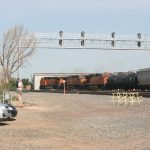 Doug, John, Pat and Travis watch a westbound mixed freight round the curve and head south for a crew change at Junior tower. Dave Poplawski photo. 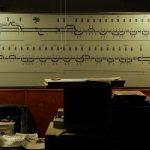 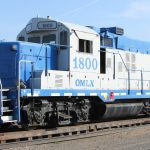 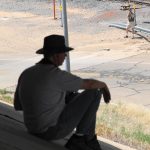 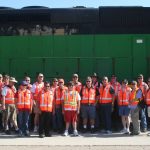 The group shot was taken during the BNSF Amarillo yard tour at the North Yard. We’re wearing the reflective vests and eye-protective sun glasses that BNSF gave us to keep. Jason McBride photo. 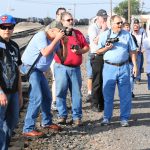 The group is shooting pictures of the rebuilt EMD GP10, used by the Panhandle Northern Railway. John Parker photo. 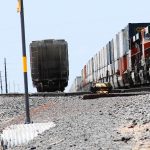 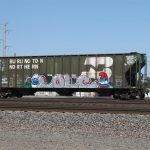 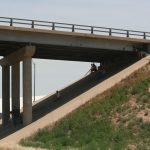 Doug, John, Rod, Travis and Mike stay out of the hot sun under the Hollywood Avenue overpass while John catches few rays waiting for the next train on the transcon. It wouldn’t be long – there was a train almost every 10 minutes or so. John must have looked depressed as a lady in a car stopped to make sure he wasn’t planning on jumping. Dave Poplawski photo. 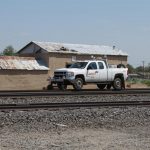 A track inspector heads west at Panhandle on the Transcon. Rodney Black photo. 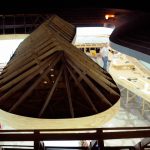 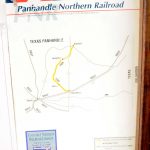 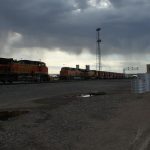 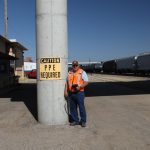 Pat shows that he is following the rules in the Junior yard by wearing the vest and safety sun glasses BNSF gave us. Rodney Black photo. 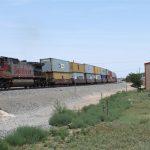 Strange Power – What were they thinking in selecting the power? A stack train about to head down the Plainview sub at Canyon with a single old unit on the point and nothing on the rear. Rodney Black photo. 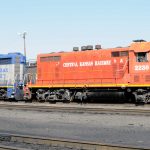 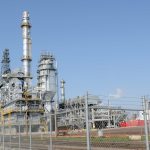 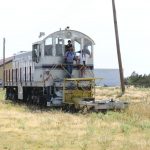 Pat, Mike and John take a ride on the switcher at the Amarillo Railroad Museum. Rodney Black photo. 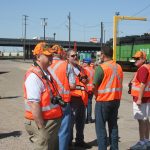