The FOBNR 2010 Convention joined our previous conventions as a good experience for all that attended.

We met Wednesday afternoon and were able to watch Peter Ferch set out a display of his recent acquisitions of BN memorabilia. We then headed to a local restaurant by the Galesburg depot, the Packing House, and had dinner among the period motif complete with meat rails hanging from the ceiling. We then had our welcome meeting and were able to watch some excellent slides of the BN.

Thursday morning found us at the depot bright and early to join a full trainload of railfans (us) and Cub fans for the trip into Chicago. Amtrak and the BNSF did well for us, as the track work was excellent and we arrived spot on time in Chicago Union Station. We then hiked to the Roosevelt Road overpass at the south throat of Union Station and were able to watch Amtrak and Metra go through their morning’s work. We then caught Metra and went to the station at the west end of BNSF’s Cicero Yard to watch the assorted mid-day traffic on the BNSF main. Arriving back in Union Station (which is a story onto itself) we grabbed sandwiches and headed for Amtrak back to Galesburg, arriving back in Galesburg by late evening. In case you have never been in Union Station at rush hour, be prepared to feel like the salmon we saw in Seattle several conventions ago trying to swim upstream if you try to go against the flow of the commuters.

On Friday we gathered early and car pooled into East Peoria, IL to visit Rail America’s TP&W. This was a tour of a property very unlike those we had visited through the years with huge BN/BNSF facilities. The TP&W has a car shop with three employees, and two employees in the Engine Shop! Despite this they were able to do some excellent work and the railroad was extremely hospitable to us as visitors. We were able to learn some interesting history of the TP&W, as well as information about their present operations, which include their contract to handle all the local traffic on BNSF’s Galesburg to Peoria line. Friday afternoon started with lunch at a quick lunch and then a visit to Peoria’s local hobby shop to participate in their 40% off Father’s Day sale. Then it was back to Galesburg to train and weather watch. We were able to see a lot of rail activity, as well as a squall line move through, complete with driving rain, wind and a little bit of hail. After hiding out for a short time, the storm passed and we were able to join others at the Cameron connector to watch afternoon activity under full sun again.

Dinner was a quick one, followed by the Annual Membership meeting. Here we discussed our present and future conventions and the continued need to attract more members to the organization. We also discussed the website and the Expediter, and obtained some great input to bring to Saturday’s Board Meeting. Larry Anglund, a local Galesburg railfan and one of the guides at the Museum, then showed us multiple trays of slides taken through a number of years of watching trains in Galesburg, and we were able to see slides of 1971-75 in Eola, IL as well.

Saturday morning found us on the bus to the BNSF Classification yards in Galesburg. Rick Danielson, the Galesburg Terminal Superintendent first took us on a bus tour of the yard. He was able to show us the next project of continuing the replacement of the retarders in the hump bowl, as well as changing the geometry of the yard to allow cars to more predictably roll to the end of their tracks. He also showed us the RIP track area and the departure yards, where he hopes to add three more 9,000+ ft long tracks. We stopped at the Diesel House and saw the work being done on several GE units there and the plans to eventually add two new bays to accommodate more motive power repairs. We then got to go up into the Hump Tower and watch the five people who manage the yard and all the surrounding trackage use their computers to efficiently route up to 120 trains per day around and through the Terminal area.

After lunch we were able to visit the Galesburg Railroad Museum, now located on the area that previously was the Baggage Room of the old depot. The Museum was also able to move their two heavyweight passenger cars to the site, now “coupled” behind the preserved steam locomotive. Their collection of memorabilia was tremendous, enough even to impress Peter Ferch, our ultimate BN memorabilia collector!

Following that we had our annual Board Meeting. At that meeting we re-elected the present slate of officers and discussed the Website, the Expediter and the Archives, as well as conventions, present and future. The Website has really grown, particularly since we have abundant space to grow. Almost all of the timetables are now scanned and uploaded, as well as a number of photographs, and more to come. There was some discussion about making some of the material available to members only, and this will be studied and reported on at our December conference call. We discussed the change in printers for the Expediter, and everyone seemed comfortable that the quality was good. We also decided to make it a 20 page magazine each issue, which will require more content, either in the form of written articles or captioned photographs. The moral of the story, please send interesting, or even not so interesting materials to Kris Johnson, our Expediter editor. We also decided to plan the October issue each year to be devoted to Convention coverage. The Archives continue to grow, but continue to be manageable, particularly as more material is scanned and available on the website.

The Galesburg Convention was then reviewed, and we particularly discussed the second year of very low attendance. Because of this, we are going to formulate a questionnaire as to the reasons people chose not to come this year, and hopefully obtain some input as to what people would like to see in a convention. We then decided that the 2011 Convention will be in Gillette, Wyoming in the coal fields. We hope to have much more information on that by the January issue of the Expediter. For 2012 we are tentatively looking at Amarillo, Texas.

Following the Board meeting we had our annual Convention Banquet and welcomed Mr. Danielson, the Terminal Superintendent who had provided our tour that morning to talk about the Galesburg Terminal. He was extremely interesting, and somewhat unusual, in that he has been at Galesburg now for ten years, much longer than any speaker we had ever had at past conventions. With his tenure in Galesburg he has been able to see some real opportunities to improve the flow through the terminal, and has actually been able to see some projects through to completion. With these projects he hopes to be able to routinely accept, hump and send out over 2,000 mixed freight cars each 24 hours. By avoiding bottlenecks, like cars stalling coming off the hump, or tracks too short to build the trains meant for specific SD70MAC’s. Needless to say we did raise some non-dues revenue for the organization.

And with that the Convention ended and we went back to our everyday lives, but with many good memories and a lot of pixels to be reviewed at home. Please stay tuned however, as we will get much more information to you in the next Expediter. 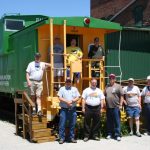 Some of the group posed on the BN caboose at the childrens’s museum just prior to the Galesburg Railroad Museum tour. 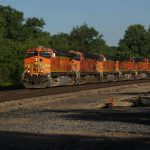 There’s plenty of mainline action around Galesburg, as evidenced by this eastbound Z train with plenty of power at East Galesburg on the ex-AT&SF trans-con. (Photo by Woody Wilson) 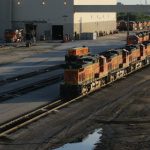 The County Highway 10 bridge over the middle of the Galesburg yard was made for railfans. A four lane bridge, with two lanes of traffic in the middle and a lane for parking on both sides. Here’s a nice shot of the engine facility with early morning light. (Photo by Woody Wilson) 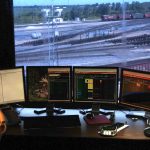 The Galesburg Terminal Trainmaster has plenty of information in front of him up in the hump tower, including a nice view of the retarders just below the hump. (Photo by Woody Wilson) 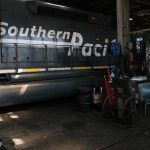 We made a side trip to the TP&W in Peoria, about an hour from Galesburg. The engine shop, with room for just one, had this ex-SP tunnel motor undergoing some minor repairs. (Photo by Woody Wilson) 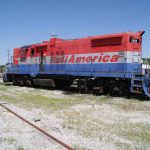 We made a side trip to the TP&W in Peoria, about an hour from Galesburg. Here’s an old GP9 (we were guessing ex-BN, ex-GN) near the inoperative turntable. Several parts were missing, so we figured it was being canabilized to keep other power in good working order. (Photo by Woody Wilson) 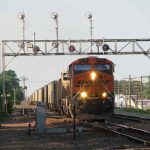 The Mendota Subdivision to Chicago has become a major coal route. We passed several coal trains on this line on our trip to Chicago and back. Here’s an empty coming into Galesburg near Pearl Street. The line branching off to the left is the Barstow Subdivision to Savanna. (Photo by Gary Seymour) 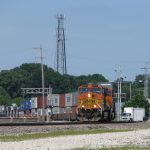 The BNSF TransCon goes right through the middle of Galesburg, and hot intermodals like this one heading west and crossing Main Street have to slow to 30 MPH for a couple of miles. But then it will be back up to 70 MPH for another 50 miles or so to the Mississippi River at Ft Madison. (Photo by Gary Seymour) 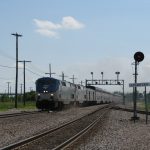 Several Amtrak trains come through Galesburg each day. Here is the eastbound California Zephyr coming through the A Plant switches around 3pm and slowing to stop at the Amtrak station just behind the photographer. (Photo by Gary Seymour) 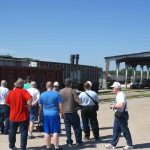 We made a side trip to the TP&W in Peoria, about an hour from Galesburg. Here is our group making our way over to the car shop. The car shop includes three empolyees, a roof, a parts/tool building, and a forklift to move the cars. (Photo by John McKenzie) 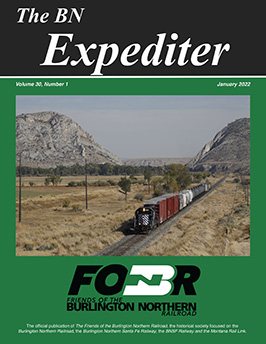